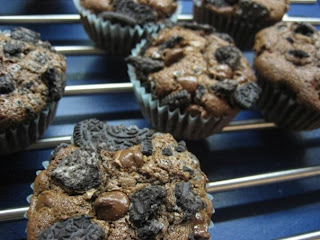 Mississippi Mud Cupcakes--chocolate cake, oreos, and chocolate chips.  Recipe from "Cupcakes!" and baked by me.
This blog and this cupcake shop (advertised on The Stranger's website) have me seriously jonesing for an excellent cupcake.  When I still lived in Chicago, I could count on Swirlz Cupcakes whenever I was in the mood and had the time to venture up to Lincon Park, but I have been sorely disappointed since the move to Tejas.
No doubt there are good cupcakeries in Texas, but the couple places I've tried here in Houston have really fallen flat for me.  One place had decent cake, but the frosting was too dense, too sweet, and there was too much of it; a 1:1 ratio of cake to frosting is more than I can handle, especially when it's super sweet.  Another place actually keeps their cupcakes in a refrigerated case--a big no-no as refrigeration dries out what might otherwise be a moist and tasty cake (and their frosting was also far too sweet and dense, also thanks to the frigeration).
There's at least one more exclusively-cupcakes bakery in town, but according to their website they will ship their cupcakes nationally.  Baked goods like cakes, with toppings like frostings, that are made with fresh, honest ingredients, really don't ship well, so I'm kind scared to even try them.  And the one other bakery that at least purportedly has tasty cupcakes  has been closed since August with no word of what's coming next.
(And if it seems like I am unfairly dogging on Houston for its lack of delicious cupcakes, I'll have you know that I initially wanted cupcakes for my St. Louis wedding, but have since been scared away by descriptions and photos of the confections from both of St. Louis' exclusively-cupcakes bakeries, and have decided to go with a tiered cake from Cravings--they only use real, fresh ingredients.)
In fact, the only cupcakes I've enjoyed while in Houston have been the chocolate sour cream cupcakes I made myself from my copy of Cupcakes!  But I am usually too lazy to make frosting, especially when I'm only making the cupcakes for myself.   I really need to have an occasion to justify baking a batch of cupcakes AND decorating them (answer: I should have more parties).
So: anyone from the Houston area have cupcake recommendations?  Anyone want to come over so that I have someone to bake cupcakes for?
On a more positive note, Whole Foods is currently selling 18lb bags of Texas grapefruits for $8.  Guess what I lugged home, and what I'm having for dessert.  As soon as I buy more eggs, I'm going to try this recipe for grapefruit yogurt pound cake, from Smitten Kitchen (part of my apparent quest to try every recipe from that blog).
says Ayn at 20:11

I feel your pain. I am guessing you've been to Sugarbabies -- I am not a cupcake connoisseur but I was only mildly impressed. What about "Crave"? For desserts, Empire Cafe (where we went that one time) is said to have good cakes and Kraftsman also does good baked goods. Oh--there's that tart place on Montrose -- 4411? You should try the pie from House of Pies at least once and something from The Chocolate Bar. I will keep thinking. I made vegan lemon cupcakes last week (no picture) and they were YUM. -Mary

So, I intentionally left out the names of the cupcake places I didn't like, because I didn't want to bias people against them because because those cupcakes didn't suit my taste. BUT, Sugarbaby's and Crave were both mentioned in my post. (One I've tried and one I haven't.) Dessert Gallery is another place that I've had mentioned to me before that also just seems too fake.

I've been to House of Pies once--need to go back. And Andrew have been back to Empire Cafe many times! but we always forget to save room for cake (I want to try the Austin Cream Pie). I've had cake at The Chocolate Bar, and while it was delicious, I cannot eat a whole slice, and while I am perfectly willing to pay $3.50 for a fancy-dancy cupcake, I don't want to pay $10 for a slice of cake the size of my head that I won't finish.

I haven't heard of the tart place before--we should go!