Justin topping off a Seelbach with champagne
This bright little number had 7 dashes each of Angostura and Peychaud’s bitters to thank for its brilliant red color and accordingly bitter taste. It takes its name from the Louisville Seelbach Hotel, which first opened in 1874 as an exclusive gentleman's club and later served as the model for elements in F. Scott Fitzgerald's The Great Gatsby.
With Kentucky bourbon as its base and additions of cointreau and champagne, what really makes the Seelbach stand out are the large quantities of two different bitters. Perhaps this means it is not a drink for everyone, but I am a huge fan; this is definitely a drink I will be ordering again. "Six parts gin to one part vermouth" is the final line of the Tom Lehrer song, "Bright College Days," but it is apparently far from the final word on the correct composition of the Martini. From Bernardo DeVoto's perfect Martini that calls for 1.845206 oz of gin to 1/2 oz vermouth and "five hundred pounds of ice" to Hemmingway's ratio of 15 to 1 (both via Eric Felten), this point of contention seems like it can really only come down to your own tastes--and what's fashionable at the time, of course.
Oh, and shaking versus stirring really does make a difference. Shaking the martini both makes the drink colder and dilutes it further than stirring, and even has an effect on the taste. Try both; don't feel pressured by James Bond (he preferred vodka martinis, anyway). Of the Martini featured in my photos, I know neither the proportion of gin to vermouth nor the method of mixing (though I could probably bug Matt to remember), but I do know that he made it with Hayman's Old Tom gin, which is a favorite of mine (an older style, slightly sweet). Anvil's ingredient list, at least, matches Felten's "Original Intent Martini" recipe: gin, French (dry) vermouth (4:1) and orange bitters.

And in my mind, you really can't go wrong with a lemon twist.

Update: Anvil's ingredients may match Felten's, but Justin would like everyone to know that he uses a ratio of 2:1 gin to vermouth, with 2 dashes of bitters.
says Ayn at 17:22 2 comments: Links to this post I started my posts with the drink on the list that was first made (oldest) and followed it with one of the first cocktails I ever had at Anvil. For post number 3, let's take a look at the first drink on the alphabetized list, Absinthe.
While prevalent enough in popular culture that most people seem to be at least vaguely familiar with "the Green Fairy," the notorious beverage is commonly, mistakenly believed to still be illegal in the US. In 2007, Lucid Absinthe was approved for legal distribution in the US, and this broke ground for other brands to eventually make their into American bars.* Thujone, the chemical in wormwood long blamed for absinthe's apparent psychotropic affects, is regulated in modern absinthes, although arguably the spirit's high alcohol content is the real culprit.
The absinthe drip that the List refers to is the traditional method for serving absinthe. A sugar cube is placed on a slotted spoon (often specially designed for this purpose) and then balanced on the glass full of liquor. Then cold water is dripped onto the sugar cube, dissolving it into the absinthe. This process not only dillutes the alcohol but causes it to become cloudy (see the first picture). Lucid absinthe, with an absinthe spoon and partially-dissolved sugar cube
Not everyone who tries absinthe is especially fond of it. Its strong anise flavor (the same as black licorice) is off-putting to many people. In its undiluted state (I had a taste this afternoon) it is almost unbearably harsh. No small number of drinks on the List include absinthe as in ingredient, including the Sazerac, which is served in a glass rinsed out with absinthe. Whether you enjoy it or not, however, you should take any opportunity to try this culturally-weighted spirit if for no other reason than to say that you've had absinthe.
says Ayn at 22:27 No comments: Links to this post

For all who are curious, Bobby Heugel has kindly made the List available online (click for a larger view): 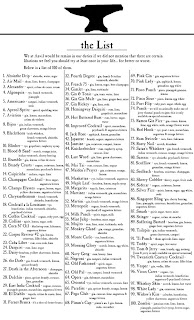 And now, back to our regularly scheduled drinking. I had a Negroni the first time I ever went to Anvil. After trying a few drinks from the seasonal menu, I asked our bartender, Justin, to make me the drink that he would most like to have at that moment. His response was the Negroni, a drink that highlights one of his favorite cocktail ingredients, the Italian aperitif Campari.
Comprised of equal thirds Campari, gin, and Italian (or sweet) Vermouth and garnished with an orange peel, the Negroni is anything but mild, from its bold red color to its bright and bitter profile, both derived from the Campari; in his anedotal guide to classic cocktails How's Your Drink?, author Eric Felten goes so far as to point out the presence of a Negroni in the hand of many a villain and "ne'er-do-well" in literature and film. Its creation is commonly attributed to one Count Negroni who had his bartender stiffen his Americano by adding gin, sometime in the early 1900s. However, there seems to be little consensus on any details beyond that.
I must admit that I did not especially enjoy my first Negroni; however, I have since developed an appreciation for Campari and look forward to my next experience of this cocktail.
says Ayn at 14:07 No comments: Links to this post One strategy I considered for actually trying all of the cocktails on the the List was to drink them in chronological order by origin--oldest to newest. The oldest drink on the List is the Port Flip, a drink made with a decent amount of port, some sugar, and whole egg, yolk and all. As you can imagine, after shaking this results in a rich, creamy drink.

In the 1887 Bar-tender's Guide or How to Mix Drinks, author and cocktail pioneer Jerry Thomas gives the following recipe for a Port Flip:

Break the egg into the glass, add the sugar, and lastly the wine and ice. Shake up thoroughly and strain into a medium sized goblet. Definitely a different sort of cocktail; I don't think I've ever had anything quite like it. Don't skip No. 73: the Port Flip! Anvil Bar & Refuge in Houston has issued a challenge to its patrons in the form of a list. Specifically, it's a list of 100 classic cocktails that they believe everyone should try at least once in their lifetime. The List was released last Wednesday along with stamp cards for patrons to keep track of which drinks they've enjoyed so far. According to Anvil owner Bobby Heugel, finishing the list will get you a 100 cocktails manual; the first five to finish all 100 drinks will receive a special surprise.

In the interest of furthering my knowledge of cocktails (and indulging my nerd tendencies) I have decided to try to blog the List: all 100 drinks. A photo of the drink, at Anvil, accompanied by a little bit of information so that the List Challenge is not just delicious, but also educational. (Nerd, remember?) I'm not going to do any major research, but I'll do my best to provide some kind of background information on each cocktail

While I will be competing to drink all 100, I will not be blogging the cocktails in the order I drink them. Nor will will the posts follow the list order (which is alphabetical). I may develop a consistent strategy, I may not. In any case, I'm looking forward to this project.

Looks like blogging is becoming a monthly thing for me. This is largely an effect of the fact that I am now on Twitter. If you use Twitter, or would like to keep up with what's going on with me, you can follow me @aynsavoy. I've also put a tweet feed over in the right margin of this blog.
Anyway, if you haven't been following me on Twitter, here's a run-down of the past month (if you're here for food photos, skip to the end):
Travel
We were all over the place in July. We visited our folks in St. Louis over 4th of July weekend, also taking the time to check out some wedding stuff. It was a short, hurried trip. Toward the end of the month we headed to Comic Con, met up with old friends, saw some panels (highlights: Stephan Pastis, creator of Pearls Before Swine, Henry Selick and Neil Gaiman discussing Coraline, cartoon voices panel, and the creative team of Doctor Who + David Tennant!), and bought some books and artwork (I got a personal sketch from Dave McKean!). Finally, I closed out the month by traveling back to St. Louis for work--Reasoning Mind is expanding to a few campuses there and I'll be supporting them.
Work
Speaking of work, my department has been superbusy preparing for the upcoming school year. Mainly this has meant training teachers. We've had at least one training a week since the end of July; next week there will be three simultaneous trainings. It's been pretty nuts, but we've pulled through. Which is good, since school's about to start.
Play
I've also become thoroughly engrossed in my current hobby: food. Being a foodie came pretty naturally to me, espeically now that I know other people who photograph all of their meals. Twitter has been really instrumental helping me meet other members of the Houston food commuity and learn about events, happenings, and tasty places to go. At the center of all this is my current fixation: a place called Anvil Bar & Refuge. Anvil makes the best mixed drinks I've ever had--which doesn't seem to say a whole lot considering that I'm mainly a beer drinker...until you consider that the drinks at Anvil are coaxing me away from beer and toward spirits. I'm addicted to the place--the feel of it and the people who work there as much as the drinks themselves. The staff have real passion for what they do, and it shows. And through Twitter, I've met up with other Houston foodies at Anvil.
In addition to Twitter, the best way to keep up with me is to check out my Flickr account. The majority of the photos you'll find there are of food (and drinks from Anvil), but considering that my social life these days consists of eating and drinking, it's a pretty accurate representation. I'm not going to post all my recent favorites photos here right now, but here are links to photo sets from some of the awesome things I've done/eaten recently:
5 Course Dinner at Reef with Cocktail Pairings by Anvil You can find more photos of my dining exploits in my Houston Food set on Flickr.
I'm also easing my way back into cooking (lots of travel is not conducive to kitchenings). Most recently, Chicken with 40 Cloves of Garlic: Before that (and before San Diego and St. Louis), I had a few other tasty experiments: (Hey everyone, I'm just testing this code out for someone else, but if you'd like to donate to the awesome non-profit I work for, feel free to click the button below!)