I am obsessed with zombies. Still. Or again, depending. I thought I'd gotten over it after reading World War Z and conquering my active terror of the living dead (I can sleep soundly after watching a zombie movie now, hooray! It was just a matter of forcing myself to read about it before going to bed. ANYWAY.).

But, even if I did take a bit of a break, now that I've got this academic interest in horror, and that Halloween has come and gone, I'm back on the zombie kick. Just for some examples, I watched two zombie films last weekend (Romero's classic Night of the Living Dead and the new comedic Fido); I dreamed about, but did not follow through with, dressing as a zombie for Halloween.

Thankfully, I don't seem to be the only one with this passion. A plethora of awesome links has surfaced recently, on websites I frequent and from friends who know me well, that are playing into my fascination. I'd thought I'd share the most recent ones:
Also, as much as I do not need anymore t-shirts, I really do, in fact, need this one from A Softer World (the cross glows in the dark!): 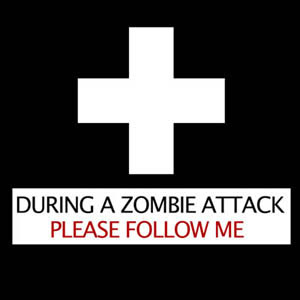