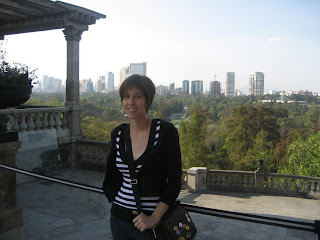 After seven hours on a bus, I am finally back in Oaxaca. Before I describe my week, I have to admit that my experience of Mexico City was colored by the fact that I was sick most of the time. Even though I stopped throwing up (largely due to sheer will power) after Monday night, I ate very lightly all week and still felt ill after every meal; today is the first day since Sunday evening that I've felt pretty normal. That combined with Mexico City's pollution (it's not exaggerated), the incredible long, busy, walking-filled days we had, and the fact that we did everything as one massive group, never getting a break from each other, made for a very exhausting week.

That said (p.s. all photos at the end of the post):

We stayed in a hotel called Hotel Gillow in the historic center of town, a part of the city that very much reminded me of a European city much more than a Mexican one (by the way, it wasn't until arriving in Mexico City that I really realized that Oaxaca isn't a big city). If you wander around the district you can't hep stumbling across colonial churches and Aztec ruins (and colonial churches constructed from stones taken from Aztec ruins). The center of the city is where the Templo Mayor at Tenochtitlan, the Aztec capital, was located, and consequently there are archaeological sites tucked here and there, which is pretty neat. Also interesting are the angles: Mexico City resides on an ancient lake bed, and consequently everything built there ever has been slowly sinking. Things don't sink evenly, though, and were also built at different times, and as a result you get rows of buildings at various heights and angles, which is both whimsical and also makes one wonder why anyone would think it was a good idea to building a city on a swamp. (Tenochtitlan was originally founded on an island, and the city just expanded from there and the lake dried up, but it's still nowhere near stable.)

On Tuesday we traveled out to visit Teotihuacan, a city that flourished during the Classic period and was around from about 100CE to 550CE (the Aztec capital Tenochtitlan was not founded until 1325, to give you a frame of reference). It's a very large site with impressive pyramids and impressive astrologically-based planning.

Wednesday we visited some Aztec sites around the city as well as the Anthropology museum. The museum was interesting because we basically got to walk through all the history we'd just covered in class, saw some artifacts that had been pictured in our texts, and saw replicas of things we got to see in person in Oaxaca. After lunch, we met up with Dr. Anne Staples, an American who has lived in Mexico for almost 48 years and is incredibly knowledgeable about everything having to do with Mexican history. She gave us a guided tour of the exhibitions in the National Museum, housed in the castle at Chapultepec, which was fascinating but difficult to enjoy because we'd walked around all day and now had to walk and stand some more. After a brief break, a quick tour of some churches with Prof. Staples, and a briefer dinner, we went to the Ballet Folklorico--a performance of traditional dances that was very colorful and pretty fun (especially since we got to sit down).

Thursday Prof. Staples joined us again and we visited the Templo Mayor, the Catedral in the zocalo, the Palacio Postal (a huge, gilt post office in a former castle), a colonial mining/engineering library, and the Palacio de las Bellas Artes--which is where we saw the ballet the night before, and contains many beautiful murals (including two by Diego Rivera) as well as awesome 1930s art nouveau architecture.

Thursday was made extra interesting due to the presences of thousands of Mexican corn farmers who all came to the city to protest a part of the NAFTA agreement that went into affect this January. I don't know very much about it, but you should look it up. The streets were positively filled with people and tractors, and it felt very appropriate given the tumultuous political history of the city, though thankfully this protest seemed peaceful enough on all sides. 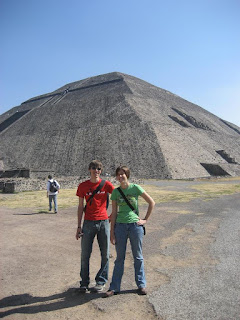 Me and Tyler in front of the Pyramid of the Sun, the tallest pyramid at Teotihuacan. We climbed all the way to the top! The face I'm making is me saying "Ugh, no way I'm going to make it to the top." 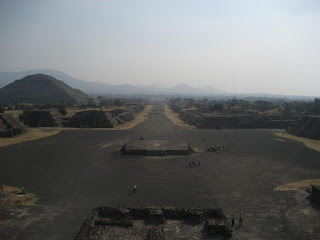 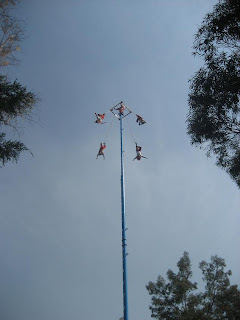 In the park outside the museum of anthropology, we watched the dance of the voladores (fliers): basically these men climbed up this huge pole, wound up some rope, tied themselves to it, and then unwound down to the ground. There's a dude sitting at the top playing flute. 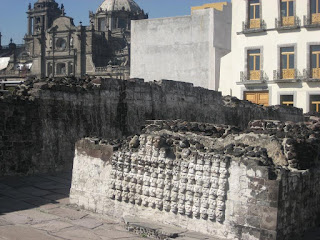 The awesome juxtaposition of ancient, old, and new in Mexico City. The Templo Mayor, in the foreground, was at one point taller than the cathedral you see in the background, but has since sunk several meters. The structure in the foreground is an artistic rendering of a tzompantli, which were racks of skulls of sacrificed prisoners. 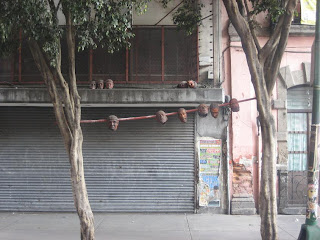 Speaking of tzompantli, I saw this this morning while wandering around. I'm not sure what the significance is, but it struck me for obvious reasons.

I took fewer photos than I might have because my camera battery was low.
says Ayn at 21:06