There's a reason this blog is typed, folks (besides the fact that that's the simplest way to get writing on the 'net): I have shitty handwriting. But, thanks to recent experiments, I've discovered that I'm not doomed to be so! Observe (you're gonna want to click): 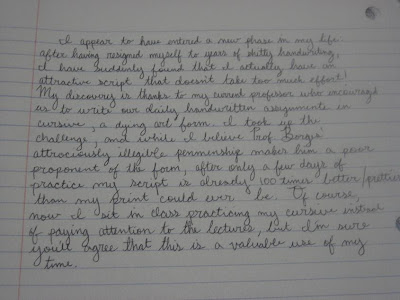 And with more effort, I can actually make it even more elegant! Although, I must admit that after writing that, a page for class, and two pages of fiction (yes, fiction! I'm making up stories just to have an excuse to practice cursive!), my hand is really worn out.

Maybe I'll go through a period soon of handwriting my posts...or at least handwriting flash pieces and posting photographs. That might be cool.
says Ayn at 22:54

I think that practicing cursive writing is 100% more useful than listening to Professor Borges, from what I've heard.

Also, I wish my handwriting was that pretty. It can be at times but then, only a few pages later, it all goes to shit. I guess I wouldn't notice that problem if I wrote flash fiction.

It's true that the most I've been writing is one full page (assignments for class)...I never handwrite more than that (I guess I've written stories out in pages, and maybe it will be easier now that I know I can do cursive).

My cursive still isn't much faster than printing, since it gets a little sloppy if I don't pay attention.

I embarked on an attempt to improve my handwriting a month ago. I found a recommendation for a book, Write now (http://www.amazon.com/Write-Now-Complete-Program-Handwriting/dp/0876781180/ref=pd_bbs_1?ie=UTF8&s=books&qid=1208447693&sr=8-1)
which felt silly and grade-schoolerish, but the style of handwriting (called italic) is very legible.
I'm at the same point where my cursive is as slow as printing unless I want it to devolve into chickenscratch. I've been using it to outline stories though, for practice.
Also, I bought a fountain pen. It probably doesn't help, but it's a cool incentive to practice the cursive.