An ethical quandary, and an indulgent day of cooking

The ethical quandary has to do yesterday's conviction of O.J. Simpson for armed robbery and kidnapping. Yes, I do mean the same O.J. Simpson who was exonerated 13 years ago for murder.

Now, I only know the vague details of this current case (the article is not especially well-written), and I'm also only vaguely familiar with the details of the 1995 case, as I was all of eight-years-old at the time. I do not have an opinion on whether or not Simpson was guilty in either case. Disregarding the facts (which may seem like a dangerous thing to do) in either case, however, I was stunned to read this:

...prosecutors told jurors during opening statements that the armed confrontation at the Palace Station hotel and casino grew out of grudges Simpson had nursed since his murder trial and civil case, and suggested that they could right a wrong by convicting him.

"You will be able to write that final chapter, the chapter of arrogance and hypocrisy and that will be the true verdict. The verdict you can feel good about," prosecutor Christopher Owens said at the time.

First assuming the prosecutor actually meant to say, "write the final chapter on this story of arrogance and hypocrisy" rather than what he literally said, what is said here strikes me as incredibly unethical. The prosecutor is asking the jury to convict Simpson for crimes he was aquitted of over a decade ago, because in the prosecutor's belief Simpson should not have been aquitted of those crimes. To me, this seems to undermine the point of our legal system. Even if Simpson is guilty of those murders, in which case a guilty verdict could in fact be seen as righting a wrong, it would not be a "true verdict" in the matter of the case at hand. It is distinctly NOT the role of this jury to determine Simpson's innocence or guilt in matters the court has already dealt with, and I think the prosecutor is crossing an ethical boundary by giving them that responsibility.

As I said, I don't have an opinion about Simpson's guilt. I think it's likely that he is in fact guilty of the crimes he was convicted of yesterday, and there may be character evidence, related to the murders/murder trial, that came into play in the robbery incident, but the result of his previous trial is neither here nor there.

Anyway, I don't have anything else to add on this matter. But I was really bothered by the prosecutor's plea to the jury to right a wrong of the past--because it goes against my understanding of the law.

On a less serious note, today was a day for indulgent food. First, I made chocolate cake--in a mug, in the microwave. 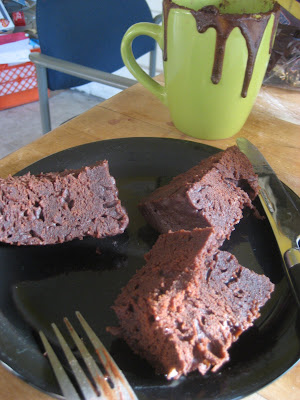 The main downside to this cake--because what could be wrong with a cake that takes five minutes to make?--is that it is very dense, without having enough flavor to make that density appreciable. I'd like to find a way to either have the cake turn out fluffier, or have a stronger flavor. But you should definitely try it if you're craving cake.

Second, while I was at the grocery store buying cocoa for the mug-cake experiment, I noticed that avocados were only $1 and purchased three which ended going into what is possibly the most delicious guacamole I have ever made. 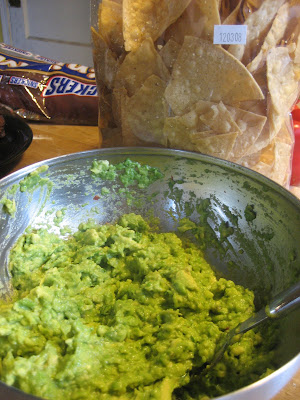 It's all gone now, but it was excellent while it lasted. Three avocados, 1 large clove of garlic (probably equivalent to two regular cloves), a handful of chopped fresh cilantro, the juice of half a lime, dash of salt and pepper, and a small amount of dried chile de arbol. Mmm.

Otherwise, not much going on today. Thanks to a couple of late nights, I ended up sleeping until almost 1pm. I've done a bit of reading, picked up stuff around my room, and purched food for a couple other meals.